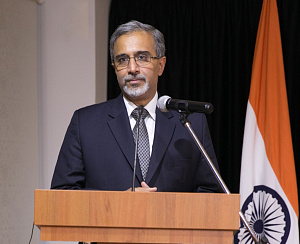 Recently the Embassy of India in the Russian Federation (Moscow) hosted a meeting of representatives of the Government of the Khanty-Mansi Autonomous Okrug – Ugra and the diplomatic corps of India.

The working meeting was attended by Deputy Governor of the Autonomous Okrug, Alexei Zabozlaev, Director of the Department of Information Technologies and Digital Development of Ugra, Pavel Tsiporin, and Ambassador of the Republic of India to the Russian Federation, Bala Venkatesh Varma.

During the meeting, the head of the Indian Embassy expressed his interest in the development of further cooperation between the countries and expressed his readiness to participate in the XI International IT Forum with the participation of BRICS and the SCO countries, which will be held in Khanty-Mansiysk
from 10 to 11 June 2019.

Bala Venkatesh Varma will visit the IT Forum for the first time. But representatives of this country are constant participants of the forum. Last year, India had the largest foreign delegation of 18 people in Khanty-Mansiysk. There were representatives of the diplomatic corps, the business community, IT-companies and government agencies among them.

Minister of Electronics and Information Technology of the Republic of India, Ravi Shankar Prasad, is expected to participate in the upcoming IT Forum.