Junior information security competitions are being held in Ugra 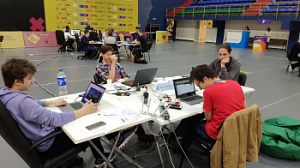 The fourth Ugra junior information security competition “Ugra CTF 2019” is opened today, on June 10, in Khanty-Mansiysk in the framework of the eleventh international IT-Forum with the participation of the BRICS and SCO countries.

Here are 9 teams of 5 people each from the district capital, Surgut, Nefteyugansk, Uray, and also from Moscow.

“To be a professional user and be able to manage information technologies, you need to be sufficiently “pumped”. And this is where this “pumping” happens, when participants are guided, understand how to accomplish a task that is close to reality. Such activities are very necessary for the children not only for vast experience, but also to be able during the training process to designate for themselves vocational guidance in the IT industry and remain therein”, Viktor Minin, Chairman of the Board of the Interregional Public Organization “Association of Heads of Information Security Services”, said

According to him, participants who have passed through such a school can easily find a job with a decent wage.

“For the first time, the tasks for these competitions were written by the winners of the first year of the competition, who took the third place in the overall standings at the federal level two years ago, but then they were the only schoolchildren”, Natalya Peshkova, Consultant of the Department of Information Systems of Electronic Government of the Department of Information Technologies and Digital Development of Ugra, said. “Today, up to the evening, competitions will be held, tomorrow, an analysis of tasks will be held, and battles will be held between participants for the first time as well”.

Last year, the team of Danil Alyukov from Khanty-Mansiysk took the second place. This year, the eleventh-grader at the Ugorsk Physics and Mathematics Lyceum is also determined.

“We are preparing for competitions by solving similar tasks in the Internet, referring to the documentation. The easiest tasks can be solved in one minute, and the most difficult take hours. These competitions give me a lot of experience and will help me in my future profession, because it will definitely be related to IT technologies”.

It should be reminded that the qualifying round of these competitions was held in April 2019 at six Ugra sites - in Khanty-Mansiysk, Surgut, Uray, Nizhnevartovsk, Nefteyugansk, and Yugorsk, as well as online for participants from other cities. The competition was attended by 254 participants (71 teams), of which 220 people (59 teams) are schoolchildren and students.

At the site in Khanty-Mansiysk, on the basis of Ugra Research Institute of Information Technologies, 6 teams (23 participants) competed for the right to participate in the final of the “Ugra CTF 2019”.

The absolute winner of the qualifying stage was the team “YummyTacos”, consisting of students of the Ugra Physics and Mathematics Lyceum, and it scored 1250 points at the qualifying stage. In second place is a team from St. Petersburg and Moscow “VV3N33DM0RFL4G $”, which scored 1200 points; and the third goes to a team from Surgut “Novye ParniTurbo”, which scored 1075 points.

Note that the team that won this tournament will participate in the Cup of Russia, which will be held on November 29-30 in Skolkovo.

The general partners of the IT-Forum are Rostelecom, Lukoil, PRIME GROUP, and Slavneft-Megionneftegaz.