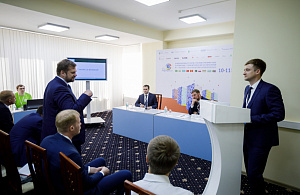 On the platform of the international IT Forum, a round table "Information technologies in oil and gas production: digital field, present and future of digitalization of the industry" was held.

Alexander Nikiforov, head of the department of LLC Gazprom Transgaz Yugorsk, told about creation of digital twins for the purposes of optimization of asset management in the oil and gas industry.

"Today, the competition demands transition to the new level of management of industrial process, that is to the intellectual level ensuring automatic monitoring of critical factors and a possibility of quick response with use of systems of decision support, in particular intellectually trained search engines".

Project director of PJSC Rostelecom Vladislav Syurkayev spoke about the "Digital Well" project: "Today we see how technologies are implemented into everyday life, and we understand the evolution of the processing equipment, whereas control measuring devices are produced with built-in modems, with certain technologies, and they allow us to get rid completely of certain engineering infrastructure which brought certain expenses with it".

Problems of digitalization in the oil and gas industry were addressed in the report by senior research associate of the department of geology and geochemistry of combustible minerals under the geological faculty of FSBEI HS Moscow State University named after M.V. Lomonosov Roman Sautkin: "In digitalization, the crucial role belongs to people with new mindset, non-standard approaches and the data. Data have to be verified and structured because if we use incorrect data, we will receive nothing, including from the digitalization".