The governor of Yugra attended the Digital Technologies for All exhibition 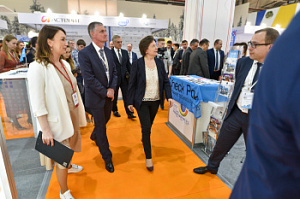 The official delegation started the exhibition tour with the stand of the Government of Khanty-Mansiysk Autonomous District-Yugra where the Neural Network project was presented. At the Native Languages of Yugra stand, there was a master class in studying of native languages of indigenous people of the North with use of digital technologies. The electronic resource allows easily using a dictionary in the format of simultaneous interpretation. This is a unique product as it stores three dialects of the Khanty and Mansi languages in the digitized format.

Then, the delegation moved on the International Participants stand, where director and head of the department of Information Technologies & Telecommunications of the Federation of Indian Chambers of Commerce and Industry (FICCI) Sarika Guliani held a presentation of solutions of Indian IT companies in the field of information and communication technologies.

FICCI provides a platform for industry and cross-industry business communication and reaching consensus, and is the first contact point for the Indian industry, politicians and international business community: digital economy, telecommunications and infrastructure, IT and IT-based services, innovative, language technologies and neuro and linguistic programming.

At the stand of Huawei, the delegates were greeted by the head of the group of development of regional business of Huawei Enterprise BG Vladislav Mikshevich. A presentation of the project Huawei Solutions for the creation of "the smart city" infrastructure was held for the guests: high-level architecture, excellent opportunities of integration and operation, various service applications.

At the stand of JSC InfoTeKS, deputy CEO Dmitry Gusev spoke about program and SW&HW means for the organization of virtual private networks (VPN) and infrastructures of open keys (PKI); quantum distribution of keys; internet firewalling and personal network screens.

Director of the autonomous organization of Khanty-Mansiysk Autonomous District-Yugra "Yugra research institute of information technologies" Andrey Melnikov shared information about a pilot project on identification of violations of land plot use.

At the stand of the partner company of the Forum, CEO of LLC PRIME GROUP Maxim Lukichev presented a project of PRIME GIS. It was developed within the Import substitution program and is intended for processing and visualization of spatial data in a thin client, as well as for the solution of analytical tasks and generation of geostatistical reports.

Vice-president of the exhibition, director of macroregional branch Ural of PJSC Rostelecom Sergey Gusev presented the Smart City project to guests of honor. The project is included in the federal program "Digital Economy". The exposition clearly explains the principles of creation of a "smart city". As we know, three cities from Khanty-Mansiysk Autonomous District-Yugra: Khanty-Mansiysk, Surgut and Nizhnevartovsk - are officially included in the list of pilot cities under the Smart City project. The application has been approved by the Ministry of Construction and Housing and Utilities of the Russian Federation. The task of pilot projects within the Smart City project is to become testing platforms for advanced digital and engineering solutions, organizational and methodical approaches and legal models used for digital transformation in the field of municipal economy.

In its basic version, the Smart City platform will include such services as

"Analysis of open data" is the analysis of publications, social media, forums etc. about the city, the authorities, events and problems that creates an actual and reliable picture of mood and expectations of citizens from the authorities of the municipality.