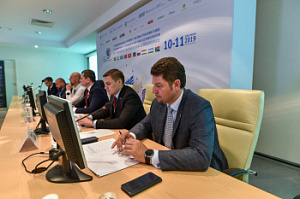 Staffing and technological breakthroughs in the framework of the national project "Digital Economy of the Russian Federation" were discussed at a joint meeting of the Council of the Russian Chamber of Commerce and Industry for the Development of Information Technologies and the Association of Digital Companies during the second day of the international IT Forum in Khanty-Mansiysk.

The meeting was moderated by Nikolay Komlev, the Chairman of the Council of the Russian Chamber of Commerce and Industry for the Development of Information Technologies and Digital Economy, and co-moderated by Dmitry Lukoshkov, the Director of the Khanty-Mansiysk Branch of PJSC Rostelecom.

When pesenting the Association of Digital Companies established for the first time on the basis of the Yugra Chamber of Commerce and Industry, its President - the Director of the Khanty-Mansiysk Branch of PJSC Rostelecom Dmitry Lukoshkov explained that the main purpose of creating the Association was to establish a constructive dialogue between the business community, regional authorities, public and other participants of economic relations on the digital transformation of the companies in the District. “Our District makes a great contribution to the growth of the Russian economy. The stability of development of such industries as mining, construction, electric power, transport and information technologies is the key to the future well-being of not only our region, but the country as a whole,” Dmitry Lukoshkov commented. "If to talk about world practices, these industries are actively transforming now: technologies of augmented reality, big data analysis, artificial intelligence, the industrial Internet technology are being introduced. Rostelecom pays great attention to digital transformation, and we are ready to unite around ourselves those companies that want to change and move forward with us. Only in this way we can “digitize” the Russian economy.

During the meeting of the Council, three stakeholders were heard: representatives of the executive authorities, business, academia and expert circles.

The Director of the Digital Development Department of the Russian Chamber of Commerce and Industry Vladimir Maslov said in his welcoming speech that the Council was ready to support any initiatives where there was a balanced position or a specific solution, including to provide assistance in formulating the necessary changes in the regional or federal context for transmission to all levels of government in order to increase efficiency and further develop the digital industry.

According to Nikolay Komlev, the Chairman of the Council of the Russian Chamber of Commerce and Industry, experts of the Council note that the Russian labor market in the field of information technologies continues to maintain an obvious imbalance caused by the outflow of highly qualified specialists. "Talented programmers who have received higher education and experience in domestic
IT companies are leaving in order to get higher incomes and comfortable living conditions," the section moderator explained. The initiators of startups choose favorable jurisdictions in order to obtain affordable funding and the opportunity to scale their own projects. It is the satisfaction of these requests that we have to focus on in the near future."

Vladimir Tachkin spoke about regional initiatives in solving staffing problems in the IT industry, sharing his experience in creating
a network IT University in Perm Territory - IT EduNet. The main task of the ITU is to consolidate the requests of the IT community for relevant staff and to attract all the available educational resources to organize full-time vocational education and training in relevant IT areas with the involvement of specialized universities,
IT companies and external experts. The second direction is iTeen IT solutions school for students of 8-11 forms.

As the President of NP IT Cluster of Siberia, Aleksandr Timofeyechev, said, business could help educational organizations in staff training. "An option for large commercial and state-owned companies, especially at the federal level, is to create a basic department. For small and medium-sized businesses, basic departments are unprofitable, but it is possible to organize a system of practices and internships, inviting pre-selected students," he commented.

According to Kirill Zaitsev, the Director of the Yugra Industry Department, the introduction of digital technologies and platform solutions in the non-primary manufacturing sector is the story of the near future. He said that today the FER is implementing the “Digitalization of Industry” program, the scope of which is funding of projects aimed at introducing digital and technological solutions to optimize production processes at enterprises.

"I propose that the Association of Digital Companies takes this information into account when promoting projects aimed at introducing digital and technological solutions at enterprises. I also would like to note that today a network of industrial parks, areas where production facilities can be located, is being actively formed in Yugra. I am sure that the companies that are members of the Association have a need for industrial products, the production of which can be located in Yugra. Here, besides federal measures, there is also a pool of region support measures, including financial ones,” Kirill Zaitsev addressed the meeting participants.

The meeting participants concluded that Russia needs to increase staff training for the growing needs of the domestic labor market, while maintaining the quality of education. In the coming years, according to the plans for the implementation of national projects, it is necessary to train about two million IT specialists, as well as managers who are able to coordinate and interact with them in all sectors of the economy. Exactly in this part the business should form clear demands for higher education.