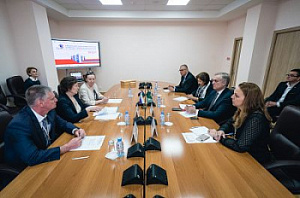 The Yugra Governor Natalia Komarova held a working meeting with the Ambassador Extraordinary and Plenipotentiary of the Federative Republic of Brazil to Russia Tovar da Silva Nunes during the IT Forum.

“We know that information security, the development of digital opportunities for the population is in the field of Brazil’s main interests. Over the years, we have been comprehensively implementing information and digital technologies, trying to carry out this work in many areas. We are ready to cooperate, develop end-to-end digital science and technology areas. We will be grateful if information about decisions taken in the Yugra land will be communicated in Brazil,” Natalia Komarova addressed the Ambassador.

Continuing the conversation, the Governor emphasized that a new industry was developing in the Autonomous District that required skilled personnel, opened up new opportunities and niches for business. Special attention is paid to the development of industrial cooperation and export of products.

The Head of the Region noted that Brazil was an industrial state rich in natural resources, which was very similar to Russia.

“Every year in April, the Yugra Industrial Forum, a platform for discussions on important areas of development, is held in Khanty-Mansiysk. At the same time, this is an exhibition and presentation platform where the latest achievements of Russian companies are displayed. Year by year, this site is becoming more open. In this regard, we will be glad to see partners from Brazil among the participants of the Forum,” Natalia Komarova said.

She added that long distances between regions and countries were not an obstacle for the development of humanitarian relations. The Governor emphasised that in Yugra the International Ecological Television Festival “To Save and Preserve” ended the day before. Its participants are traditionally representatives of the Federative Republic of Brazil. In addition, cooperation with the Brazilian party is carried out through participation in the working group of the UNESCO Adviser Committee on Traditional Sports and Games.

“Experts and spectators always watch with interest the work of the participants of the International Festival of Cinematographic Debuts “The Spirit of Fire”. Here we practice holding thematic days of cinema of certain states. Thus, the days of Indian, Chinese cinema have already been held. In our country, there is a large number of fans of Brazilian cinema. At the next festival, we could hold the days of Brazilian cinema,” Natalia Komarova suggested to Mr. Nunes.

During the conversation, the Head of the Region raised the issue of the development of the indigenous minority of the North. In the Autonomous District, international competitions are held annually for the Governor's Cup of Yugra in rowing in oblases, the participants of which are also representatives of Brazil. Great attention in the work on the development of indigenous peoples is paid to the preservation of traditions, crafts, culture of the Khanty, Mansi, Nenets.

“One of the forms of support is the international festival of crafts of the indigenous peoples of the world. We invite you, masters from Brazil to take part in it in 2020," Natalia Komarova added. “The festival will be especially successful if you personally or the embassy team act as masters.”

In turn, Tovar da Silva Nunes stated that even before arriving in Yugra, he knew that the region has an extremely powerful economy comparable to that of Brazil neighbour, the Eastern Republic of Uruguay. “I knew that oil production is the main factor with a serious impact on the economy. But I heard that information technologies are also developing here,” the Ambassador stated. “Now, of course, I know much more about the region and understand that to a large extent, Yugra owes its success to such a leader as you, who do everything to facilitate the development and advancement of the autonomous district.”

He said that in Brazil 88 percent of population is the urban population. In this regard, local authorities and the federal government face serious tasks to ensure the security of citizens. The country itself has a fairly large territory. Therefore, there is a need to use modern IT solutions to solve many problems.

“We, like Russia, are a country that is rich in mineral resources, possesses a large forest area. In this regard, the problem of monitoring the situation not only within cities, but also beyond them, is quite acute for us,” Tovar da Silva Nunes emphasized. “Following the visit to the Digital Technologies for All Exhibition, I saw developments that we can apply in Brazil.”

The Ambassador identified the use of artificial intelligence in the health care system as another promising area. So, in the Republic there is a network of large neurological centers. And this particular area could become one more line of cooperation.

Tovar da Silva Nunes told Natalia Komarova that before going to the Khanty-Mansiysk Autonomous District, he sent information letters to the largest technology parks in Brazil with the information not only about the region itself, but also about the International IT Forum. Following their consideration, many positive responses were received from these organizations. This, in his opinion, is an indication that the cooperation between Yugra and Brazil can be extremely fruitful.

At the end of the meeting, Tovar da Silva Nunes supported Natalia Komarova’s invitation to participate in the Festival of Cinematographic Debuts “The Spirit of Fire”, emphasising that Brazilian cinema would certainly take part in it.

“The Yugra project on accessibility of Internet technologies for remote and hard-to-reach territories is a terrific project. Information about it, operating IT camps, will certainly be conveyed to the Brazilian authorities, and we will implement something like this in our country,” the Ambassador stated.

After the business meeting, Tovar da Silva Nunes met with journalists, shared his impressions of the Forum, told

Yugra has a lot of experience in developing the medical direction that we found interesting. First of all, this is the time spent on the provision of medical care. We should learn this expertise and offer our medical facilities to implement these projects in Brazil."