Uray and Samarkand are getting ready to forge a twinning arrangement 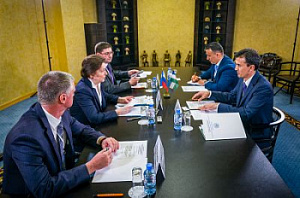 Natalia Komarova, Governor of Ugra, held a working meeting with Abdusalom Khatamov, Consul General of Uzbekistan, on the second day of the International IT Forum Attended by BRICS and SCO Countries.

“Russia and Uzbekistan are partners. The economies of the two countries are closely integrated. At the same time, not all new dimensions of cooperation have already been formalized as sustainable links,” Head of the Region addressed the guest. “In May, Dmitry Medvedev, Chairman of the Russian Government, visited Uzbekistan; he noted the need for developing the cooperation between Russian and Uzbekistani regions. He particularly emphasized that because it was in the regions that all projects of bilateral economic cooperation were eventually implemented.

In this regard, Natalia Komarova asked Consul General to support the initiative of Uray Administration on establishing contacts with Samarkand Administration. The proposal of forging humanitarian cooperation and a twinning arrangement was sent to Vokhid Rakhimov, Hokim of Samarkand. Besides, public contacts were established between representatives of the Uray national Uzbek diaspora and Samarkand’s public organizations.

“Today, venues of IT Forum gave Ugra a chance to learn about Uzbekistan’s economic and investment potential and discuss promising dimensions of our mutually beneficial long-term partnership. Our region is interested in developing the cooperation in agricultural, humanitarian, economic and tourist areas as well as ICT,” Natalia Komarova said.

Whereas the Governor specifically emphasized that a business mission of Ugra commodities manufacturers to Uzbekistani regions could give an impetus to expanding cooperation. She said this mechanism had already been tried and tested and proved its efficiency.

Head of the Region offered the Consul to establish cooperation in oil and gas services with high innovative component.

“Education and science could be other areas for joint projects. In 2018, Surgut State University signed a cooperation agreement with Namangan Engineering and Technical Institute for the purpose of integration enhancement, mutual support, and development of educational technologies along with scientific and technical, HR, innovative and production potential, ensuring solution of social and economic problems, training and retaining highly qualified talent. This agreement may become a foundational document for academic and educational R&D in oil and gas production, oil and gas services and other power engineering areas,” Natalia Komarova added.

In this regard, Head of the Region invited graduates of Uzbekistani schools to apply to higher educational institutions in Ugra even in the current academic year. “The educational sector in Ugra and Uzbekistan has great opportunities for implementing large-scale humanities projects. As for joint projects, I cannot but mention a date that is very important for both of our peoples – the 75th anniversary of Victory in the Great Patriotic War – which falls on 2020. Year 2018 saw the seventh international media expedition, Victory – One for All; it was devoted to the heroic deed of homefront workers. Our activists drove antique GAZ M-20 Pobeda (“Victory”) vehicles through cities of Ugra, Kazakhstan, Kyrgyzstan, and Uzbekistan. Let me use this occasion to thank Uzbekistani authorities for the support and assistance they provided in organizing this media expedition. In 2020, our region’s public organizations are planning to hold the 8th International Victory – One for All Media Expedition. I will appreciate your support,” Natalia Komarova said, emphasizing that Ugra was interested in continuing the cultural cooperation.

Abdusalom Khatamov, in his turn, suggested establishing direct interregional relations, formalizing them in corresponding bilateral agreements on trade and on economic, scientific and technical, and cultural cooperation, especially with well-developed Uzbekistani areas like Tashkent, Fergana and Bukhara regions that have a great potential and are interested in developing cooperation with the Khanty-Mansiysk Autonomous Okrug.

“We will be very happy if the Ugra delegation headed by you visits our Republic,” Abdusalom Khatamov told Natalia Komarova. “We hope for implementation of joint events and establishment of contacts between business circles of Uzbekistan and Ugra.”

It should be noted that turnover of commodities between the two countries reached $11 million based on the results of 2018. The Autonomous Okrug mostly supplied timber products to the territory of our neighbor country.

In Consul’s opinion, this is not a significant figure, since the potential of both countries enables them to increase the volume of bilateral turnover of commodities by several times and expand cooperation horizons. Specifically, Uzbekistan is prepared to increase supplies of both fresh and processed high-quality vegetable and fruit products for Ugra residents.