Ugra is ramping up cooperation with India 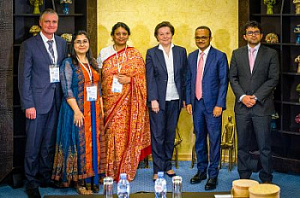 Natalia Komarova, Governor of Ugra, held a working meeting with Binaya Srikanta Pradhan, Deputy Chief of Mission at the Embassy of India to the Russian Federation, on the margins of the Eleventh International IT Forum Attended by BRICS and SCO Countries.

“The trend of developing relations between Ugra and India is very positive. We started cooperation not a long time ago, yet foreign trade between the parties grew by almost 4 times in 2018: USD 231 million compared to 63 million in 2017,” Natalia Komarova emphasized. “We really appreciate our cooperation on information technologies, too. Ugra Research and Development Institute of Information Technologies and CDAC Institute of Information Technologies, India have established long-term sustainable contacts, the parties are reaching an agreement on joint projects.”

Head of the Region named the development of software performing intelligent search and identifying tree felling at early stages for the sake of timely stopping potential violations of forestry legislation as one of the main dimensions in this area.

The second dimension was a software and hardware complex based on unique CDAC development intended for high-performance computations and application of machine learning algorithms.

“We cooperate in the area of creating joint projects; we test their applicability in the market by participating in competitions. Employees of Center of Space Services at Ugra R&D Institute together with their Indian partners from Guru Gobind Singh Indraprastha University submitted a collective grant application to Russian Foundation for Basic Research. Cooperation negotiations are ongoing between Department of Industry of the Autonomous Okrug and ZIM Laboratories, India that works on innovative solutions in medicine uptake,” Head of the Region told Mr. Pradhan.

“Ugra is a pilot venue for implementing educational initiatives. Russia’s first technoparks for children were opened in our region where children learn tech skills of tomorrow,” the Governor continued. “In June 2018, opportunities of cooperation in higher education were discussed when a delegation of the Embassy of the Republic of India visited Khanty-Mansiysk; some of these included training Indian students in medical professions at Surgut State University. The issue of student exchange for the forthcoming academic year is well elaborated. We train good professionals, since more than 1,400 graduates of Medical Institute of Surgut State University work in healthcare organizations in Russia, Germany, Sweden, Brazil, Belorussia, and Poland. Admitting future healthcare professionals from India to study at Surgut University can become a promising long-term dimension of cooperation.”

For instance, University has prepared 6-year General Medicine program in English. It is expected that about 30 Indian students will enroll.

Speaking of Ugra’s investment and innovative policy, Natalia Komarova noted that the region is oriented at creating and developing processing industries in this area. According to expert estimates, the region’s subsoil resources contain over 1 billion tons of brown coal and over 300,000 tons of quartz. In pure metal terms, this is over 400,000 million tons of iron. Products made of it are demanded by high-tech industries.

“We are ready to assist investors from the Republic of India. Specifically, the first portent of our harmonious cooperation could be a joint project on manufacturing products demanded by the market of electronic and optical components,” Natalia Komarova said. “92% of Ugra territory is covered by forests. Up to 15 billion cubic meters of timber and over 100,000 tons of wild growing herbs a year can be used in economic activity, processing these into commodities demanded in the market of the Asian region.”

Binaya Srikanta Pradhan emphasized that Indian companies are extremely interested in being present in Ugra market in various areas.

“Indian companies have invested about 7 billion US Dollars in the field of oil and gas processing. Our enterprises operate in Sakhalin, in the Tomsk Oblast and Krasnoyarsk Krai. And your region is also of interest to us,” he declared.

“We will plan this project and we can formalize all achieved agreements on the margins of the Eastern Economic Forum in the presence of Heads of our countries,” Natalia Komarova summarized.