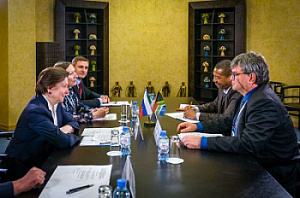 Natalia Komarova, Governor of Ugra, held a working meeting with Henry William Short, Minister Plenipotentiary of the Embassy of South Africa to Russia, on the margins of the Eleventh International IT Forum Attended by BRICS and SCO Countries in Khanty-Mansiysk.

Prior to the talk, Head of the Region noted that South African representatives had been taking active part in Forum events for six years in a row. And in 2016 representatives of the Republic of South Africa became a party to the agreement on creating an international telemedical association of BRICS countries.

“Perhaps I somewhat overestimate the value of our meetings but we are working to make sure our Forum is one of the key events in the information technologies field in BRICS and SCO countries,” Natalia Komarova shared her opinion. “I hope its participants are comfortable discussing relevant issues of the industry and working out the ways of this sector’s further development.”

The Governor reminded that the opportunity of developing inter-regional cooperation between Ugra and Free State Province had been discussed at the working meeting between Deputy Governor of the Autonomous Okrug and diplomats of the Republic of South Africa in Moscow. The possibility of creating a position of Honorary South African Consul in Ugra was subsequently tested. Natalia Komarova expressed her readiness to promote these ideas further.

“We cannot boast high turnover of commodities between Ugra and South Africa. There is an objective explanation – the distance and extreme locations in the Northern and Southern Hemisphere,” the Head of the Region noted. “But differences between our cultures and climates open up new horizons for cooperation including development of tourism, especially after the visa waiver decision.”

Henry William Short expressed his appreciation for the warm welcome to the Governor, emphasizing that the South African side was always particularly happy to visit the Khanty-Mansiysk Autonomous Okrug.

In this regard, he noted that in 2019 he had arrived to this region accompanied by delegates from the Republic’s business community. As they got acquainted with Ugra, representatives of the information technology and entrepreneurship field expressed interest in presenting their display stand at Digital Technologies for All exhibition with the Twelfth IT Forum.

“It should be noted that embassies of all African states are now getting ready for a big event – a large-scale Russia-Africa Summit that will take place in Sochi in October. Its most important part attended by Presidents is scheduled for October 24 but before that Business Forum will be held on October 23. This event is extremely important for the Republic of South Africa,” Mr. Short said.

The Minister named secondary hydrocarbon processing, development of chemical production, specifically manufacturing of bitumen for road construction in the territory of the Republic, as some of the priority dimensions of cooperation with Ugra.

“We are interested in adding more value to the product in this area,” Natalia Komarova noted. “If investors show interest, it makes sense to turn attention to other oil and gas processing products that are not so popular in this market.”

The guests were also interested in the activity of Ugra weather forecasting and climate change monitoring bodies. Henry William Short emphasized that Africa was subject to various natural disasters that had extremely negative impact on social and economic wellbeing. That is why the Autonomous Okrug’s experience would be very useful.

Another promising dimension of cooperation is the aquaculture. “This sector is very poorly developed throughout Africa in general. In the Republic of South Africa, this activity is considered to be a high priority. It is the aquaculture that we will pay special attention to for the sake of its accelerated development,” the Minister explained.

“Since Ugra has, among others, state enterprises that are involved in reproduction of biological resources and provision of fish products to the population, we are happy to share technologies, experience and knowledge of our experts in this area,” Natalia Komarova shared her readiness.

At this talk, the parties also discussed issues of cooperation and interaction in electric power generation and transportation fields.

“We could work on all these dimensions with a more practical focus at Russia-Africa Summit in Sochi, since each of them is a competitive advantage of the Khanty-Mansiysk Autonomous Okrug,” Henry William Short suggested.

Natalia Komarova concurred with the Minister, emphasizing that there was a real opportunity of formalizing the achieved agreements.